Nails Fungus: certainly this is one of the problems and Nail Diseases that most afflicts women of every age. It is a solvable problem, but to never neglect!

Between Nail Diseases, that of Onychomycosis – that is Nails Fungus - is certainly the one that most bothers who is afflicted with it.
Shame, fear to show the problem to the Beautician or Nail Technician, often stop who is afflicted from acting; actually, it is a rather widespread Nail Disease, certainly solvable with simple expedients and precautions.

Nail Fungus can affect both the skin of Hands and Feet that of Nails: in the latter case we speak of Onychomycosis, talking about the "infestations" caused by dermatophites or other fungus and yeasts.
Almost always, fortunately, it concerns exterior Nail Fungus, linked to specific cases of moisture and acidity that favour the proliferation of the microorganisms that cause the "fungus", then visible even to the naked eye and characterised by dark spots of variable sizes.

Nail Fungus, although less serious than other types of cutaneous mucouses, must never be overlooked!

The Onychomycosis, in fact, can affect not only the surface of the nail but also spread toward the cutaneous tissue (area of the cuticles), both the underlying tissue that the nail surface.

Obviously, this is the most serious cases, often due to excessive negligence of the problem.

For this reason, our first suggestion in case of Nail Fungus is to avoid any type of Nail Treatment (Nails Extension, Gel Nail Polish, Traditional Nail Polish), which could aggravate the condition of the nail, and to consult a doctor that surely will be able to suggest You the most suitable Treatment for the case.

With the right medical therapy, in a short time, you will be able to “battle” and solve the problem. 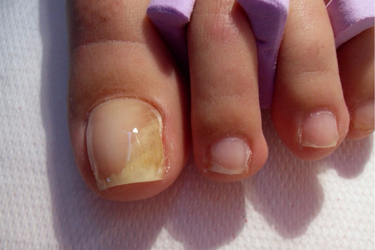 The rigger causes of Nail Fungus may be numerous and unfortunately between these there are also the insufficient professionalism in the realisation of Nail Works such as Gel Nails Extension or the Gel Polish Application.

A badly carried out work, in fact, can cause swellings not only unaesthetic but also dangerous: once the water has infiltrated with which our hands are in contact every day, in fact, there is the creation of moisture conditions such as to favour the appearance of Mildews or bacterial colonies.

Soon, here in our Manicure and Pedicure Blog, we will speak about another very specific and important subject, that is that of Toe Nails Fungus...Follow Us!

With the Cold Season upon us, many of You got in touch with Us seeking for some advices to take care of Chapped Hands: here there are the suggestions of our Master Giovanna Mary Fadda!

The site uses cookies and third-party to improve services and optimize the user experience.
Continue browsing without changing your browser settings accept cookies.